After graduating from Parsons School of Design in 1973,   I worked for the the top lighting design firms in New York City, Howard Brandston, Jules Horton, and James Nuckolls Lighting Design.

In December of 1975,   I left the big city and joined the Worlds Largest Architectural Engineering firm, Hellmuth, Obata and Kassabaum Architects in the St. Louis corporate office St. (over 3,000 employees around the world)

After a few years I became the Corporate Director of Lighting Design,   I was very fortunate to recruited and train some of the best lighting designers known today....   Randy Burkett, Thomas Kazcowski, Mary Jo Ward, David Raver and Dorreen Manichia and many others.

One day I got a phone call from one of my favorite clients,    Mr. Sam Fox.    I had been working on his various projects over the years and was currently finishing up on the lighting for his new residence.

Sam's question was "Munson...   What do you know about art lighting?"

I reponded "Well...    I designed lighting for at least three museums."

I replied   "Are you talking about "picture lights?"

I had to admit that I had never used a picture light.   I had always used track lights or recessed framing projectors or adjustable accent lights.   I remembered when I asked about lighting the art for Sam's house, the decorator said it was his job and not my concern. 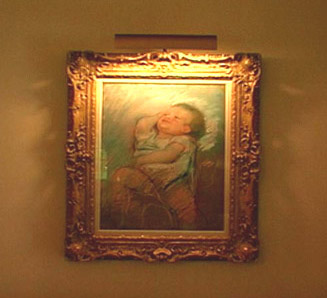 The next day I met Sam and he explained that his curator cautioned about using these picture lights with exposed incandescent lamps.    He told Sam, "the radiant heat would literally bake the painting and that the process of heating and cooling overtime would eventually crack the varnished finish as well as fade the pigments from the unfiltered light."

Sam gave me the task to find a light that would not destroy his art.

When I returned to the office,    I called my fellow IALD member, LeMar Terry of the Metropolitan Museum of Art in New York.    He admitted he had never used a picture light either, but his advice was to find one that had no heat, no UV, and would be great if I could find one that actually lit the whole painting.

I also called my former employee David Raver,    who was on the IES museum lighting committee.    He agreed and explained the latest museum lighting guidelines and lighting levels.

I went through all my lighting catalogs and only found one that looked promising.   When it arrived, we had to have an electrician install it as it was hard wired....

He had to cut a large hole in the plaster wall behind the painting for the transformers,    The painting look horible as it had striations from the spread lenses.    The color of the light looked green from the combination of the dichroic filters on the MR-11 lamps and the lime glass spread lenses.    We then wired it to a 10 volt Lutron dimmer that flickered when dimmed slightly.

We then realized that if he had a fire the painting would be difficult to remove as it was hard wired !

As a professional IALD lighting designer, What a embarassing disaster..... I specified a light for a client that failed to work for his needs.

I decided at that moment;

If I could not find the proper light for my client, I needed to design and build him the Perfect Picture Light.... "Myself"

The Perfect Picture Light Must Have....

- A smooth even wash of light over the entire painting top to bottom.

- No damaging "Blue Light Hazard", No UV below 400nm or IR heat to the surface of the painting.

- The light should have a simple plug with a cord of the proper length that fit recessed clock outlets (not hardwired) No large plug in or remote transfomers.

- The Light should match the color of the frame

If frameless or "Canvas Wrapped", the light should blend into the wall color. 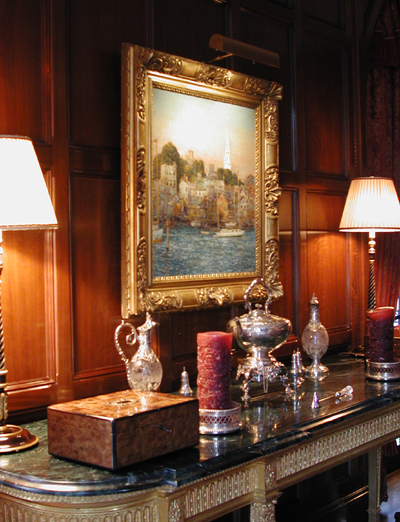 
How Much Light is Safe?

My clients ask; How much light is safe for my painting?

The fact is that all light will degrade your artwork.   Period.
That is why most art museums put their art in the dark storage for 6 months a year.

The IES report below says 200lux (20fc)on oil paintings and 50lux (5fc)on watercolors. The number of hours of exposure is also part of the formula.

The IES museum report is below. The rule is "Less light for limited hours is better".

I have clients who want it bright enough to see the details. I say turn the dimmer up to see the details but down when you're not in the room.   Please don't hang your priceless painting in a bright sunny room.

One of my dear friends had a $90 thousand french painting of a beautiful little girl, fade into a $2,500 painting after years of neglect. 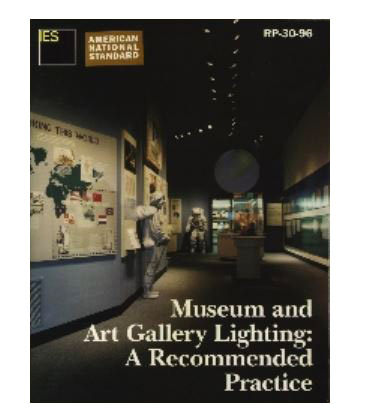 Museum and Art Gallery Lighting RP-30-96 is among the most respected reports about the display and lighting of artwork in museum and art galleries. It is a reference for architects, engineers, lighting designers, and museum curators.


The report says that both light and heat can seriously damage oil and watercolor paintings, and protecting works of art from the natural aging process is something to be taken seriously.
Everyone is aware that artwork in the sunlight will fade, crack, oxidize beyond recognition. Remember your poster on your bedroom wall?

The key to prolonging life of artwork is the stabilization of temperature and humidity, and minimize exposure to radiant energy or light.
Light is radiant energy, and exposure to light gradually causes permanent damage to many museum objects.

When radiant energy strikes the surface of artwork some portion of that energy is absorbed. This can promote two distinctly different processes that can cause degradation of the painting,    radiant heating effect and photochemical action.

Unfiltered picture lights with bare exposed incandescent bulbs provide high light levels up at the top and produce a temperature rise several degrees higher than the rest of the painting.

The report says raising the temperature speeds up all chemical actions, including oxidation, but radiant heating has other deleterious effects.   The surface will expand relative to the body of the object, and moisture will be driven from the surface material.    The effects of this cycle can be devastating, particularly in materials have differential expansion coefficients, or where surfaces are composed of different materials, such as pigment and/or varnish over a substrate. The symptoms are surface cracking, lifting of surface layers, and loss of color.
The symptoms of photochemical action may include fading or darkening of colors, yellowing, embrittlement, loss of strength, fraying of fabrics, and even quite dramatic color changes of some pigments.


The report makes a special note: All lighting should be filtered or "carefully selected" to eliminate all harmful radiation


IES recommended maximum light levels and the maximum hours of exposure per year depending upon the type of material on display.

The Masterpiece Series™ by "Fine Art Light" will meet all of the requirements of RP-30-96 by use of its patented IR and UV filter system and by adjusting the lighting levels with the dimmer control.

Are LED's Safe for Artwork?

It is my opinion along with others, that not all LED light sources are safe for art work.    If a manufacturer says or advertise LED's have No UV- No IR,   That alone does not make them safe for artwork.   Yes there are some LEDs that are rated Safe for Museum lighting with a safe spectrum.   Xicato has a LED called the Artist Series® that is safe. (it is too large to fit inside my housing)    It has a spectrum that is similar to mine and I am currently developing and plan on building a safe spectrum LED replacement lamp. 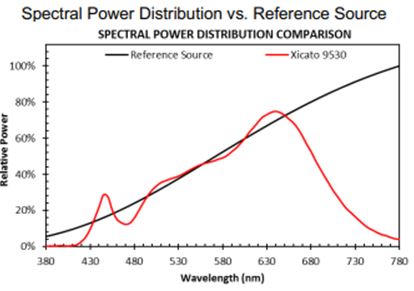 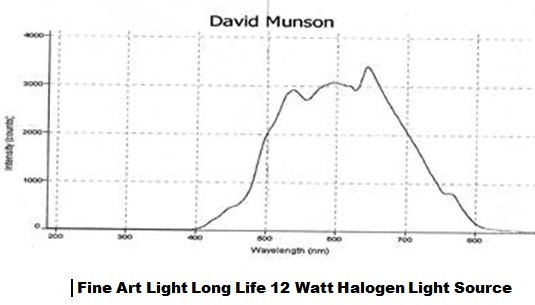 Why am I suspect of the average LED ?    Here is my true 1st hand story that got me to question "How safe are LED's for art work?"

My daughter bought a house in Hollywood that had 4000K LED strip lights (undercounter lights) and she asked me to replace them as they were too blue and gave her headaches.

I told her we could simply install a LED color filter made by LEE FILTERS and could convert the 4000K color to match the Halogen downlights.   I have been using LEE FILTERS and Rosco filters for years and have never had a problem.    We drove to the local LEE FILTER filter store and bought filter #204. I cut it into strips and installed it and we now had almost perfect Halogen color! 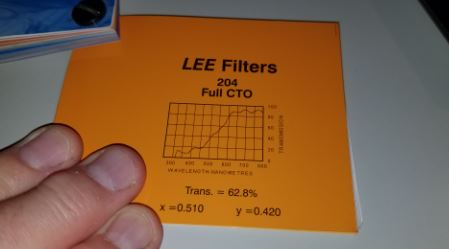 The color correction was installed and I thought the project is perfect. 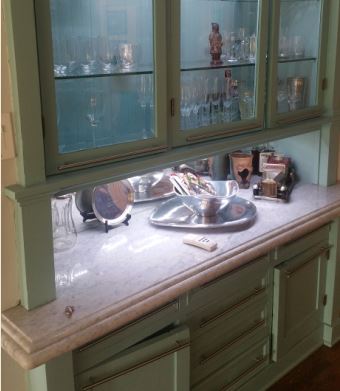 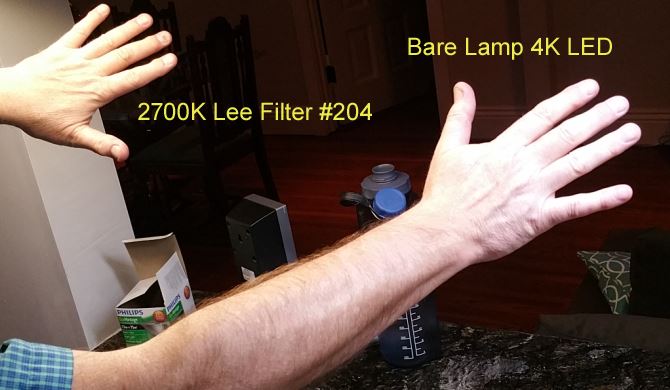 
When I returned 6 months later I discovered the LED filter had been destroyed.


When I returned 6 months later the original blue color returned. I assumed someone had removed the filters. When I called LEE filters to ask why it failed, "I already knew but had to ask" If LED's have no UV or IR, Why did your filter fail?

They said they now have a filter that is guaranteed to last 60 hours before you need to change it. Yes 60 hours.

Lee told me the film industry uses 4K LEDs and use their filters to warm them up. After 30 hours the old filter had to be changed because the camera on the later scenes showed a color shift as the filter failed. The new filter is just twice as thick.

When I was doing lighting on off Broadway shows in the 70's I never saw filter failure like this.

Lee filter experts said the LED 450nm spike causes all the damage and that’s why your dentist puts on safety glasses.
Look at the warning on Dental Blue LEDs

High color temperature LED's and LED's with large spikes in radiation at 450nm will damage your artwork.


Below is the first article that caught my eye years ago and confirms why the "Yellow" Lee filter was destroyed.

Link above is article about LED spectrum could ruin yellow pigment. Although the test was run with a Xenon lamp with the same spectrum, I found that the kitchen LED's concept confirmed the article.

I sent the photo of the LED failed filter to a lighting expert in the LED fixture business. He said they experienced the same thing when they put filters in some down light LED's so they match the rest of the order. 6 months later the client called and said his down lights where changing colors.

Caution: LED's color spectrum has to be carefully analysed before lighting art.


Also any manufacturer who tells you that they can exceed the lighting levels recommended by the IES with their LED art light,     is a fool.


Think all LED's are safe?

Why does your dentist put on eye safety goggles when he brings out the "Dental Blue LED" to cure the epoxy filling?

There is evidence that some LED's are actually harmful. Google "Blue Light Hazzard"

Electrical Safety for your artwork.

Arc fault circuit breakers are now required by the National Electrical Code on all new construction.   I believe that this technology should be applied to all circuts to protect your art work as well.


What is an arc fault?

Arc faults are usually caused by loose connections such as improperly installed wall receptacles, loose wirenut connections or electrical cables pierced by nails, etc.   The arcing from a loose connection will arc and build up carbon and heat until the fire starts.

Circuit breakers are designed to protect the wire with an overloaded circuit,   but they cannot prevent fire caused by an arching circuit.

How can I prevent arc faults?

You can't prevent arc faults from occurring, but you can install a device that will detect and stop them-by interrupting the electrical current-before any damage is done.

This Arc Fault Circuit Interrupter (AFCI) electronically detects an arc fault and stops the flow of electricity in a fraction of a second. No electricity, no heat, no fire.

I highly recommend that all electrical circuits for your artwork lighting be installed with this type of electrical breaker.

My Masterpiece Series® and Gallery Series® products have been safety tested by U.L.